Great passenger list for the ship dated 9/3/1927 sailing form NYC. This is in great shape thought it has browned with age. Super WSL embossed flag on the cover surrounded by gold lettering.

Lovely racing card for the ship dated 9/5/1932. The races were held in the main Lounge starting at 2:30 sharp … bets could be placed at 2:15. Great condition for being almost 90! From the late Bob Lenzer collection.

An Excellent copy of the QM Souvenir booklet that was sold to passengers and visitors alike. There ship is covered in photos and renderings … the booklet is covered with info and factoids. It seems to be dated to the ships maiden year … when she was the world’s largest ship. The rear cover is printed with period ads for Colliers and other magazines.

An Excellent publication reviewing the ships Great African Cruise of 1950. Well designed , the cover is made to look like Zebra skin and has different faces of the diversity of people and countries that would be visited on the cruise … which included Africa South America and the Mediterranean. This is a cool booklet in good shape … there are some bumps to the cover corners.

Nice large format booklet for the Mauretania/s 1961 Christmas and New Year’s Cruise to the West Indies. Nice booklet with a full-page colored deck plan inserted. Great almost like new condition with very little wear. Excellent Photos and graphics. There is a little remnant of an address label on the rear cover.

Great interiors fold out for the Green Goddess … one of the nicest ships of the postwar period. Cunard made mega $$$ off of her for almost 2 decades … and then she was quickly sold off then the profit margins plummeted. Lovely green and gold fold out that highlights her interior spaces well.

Nice heavy tissue plan for the Sylvania … one of the 4 Canadian sisters. Very simple design and perfect for the tourist crowd of the day.

Great CC interiors booklet for the Atlantic fleet to NYC …QE, QM, Maury and the Caronia. Filled with nice color photos … I wish I could have the contents of the QE’s CC lounge .. the furnishings and carpet are amazing!

Great of the earlier version interiors fold out for the mighty sisters … there will never be another pair like these two. The are some of the most famous liners of all time. Lovely color graphics and photos for both ships. A tiny bit of seam separation at the fold lines.

Cunard Line: Getting There is Half the Fun” QM/QE Interiors fold out.

Great interiors fold out for the mighty sisters … there will never be another pair like these two. They made millions and millions for Cunard. Lovely color graphics and photos for both ships. 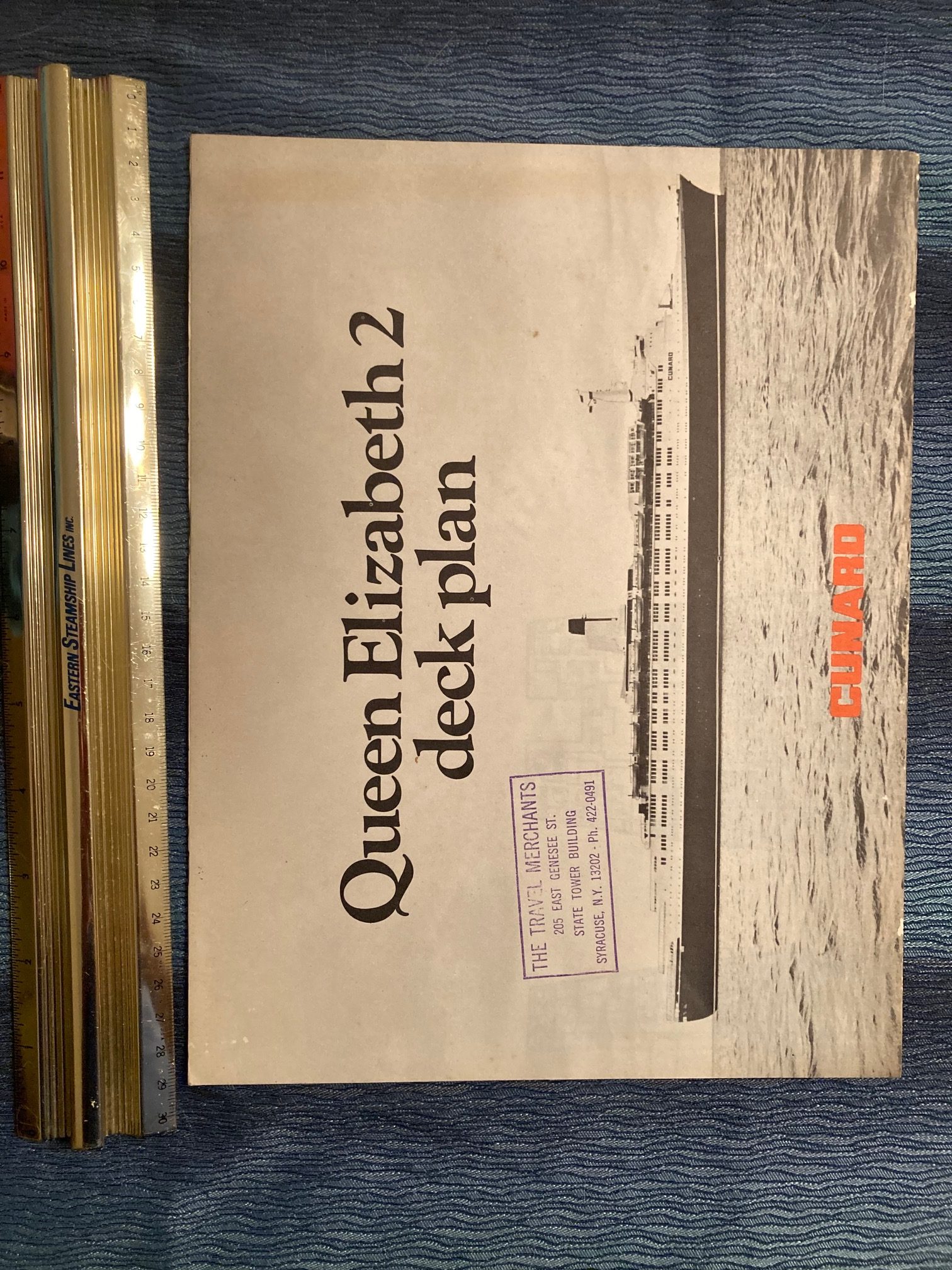 Large DP’s for Cunard’s longest serving liner : the QE2.Though her first years were not the most profitable… the QE2 settled into her niche and was beloved by fans across the world as a most notable ship. 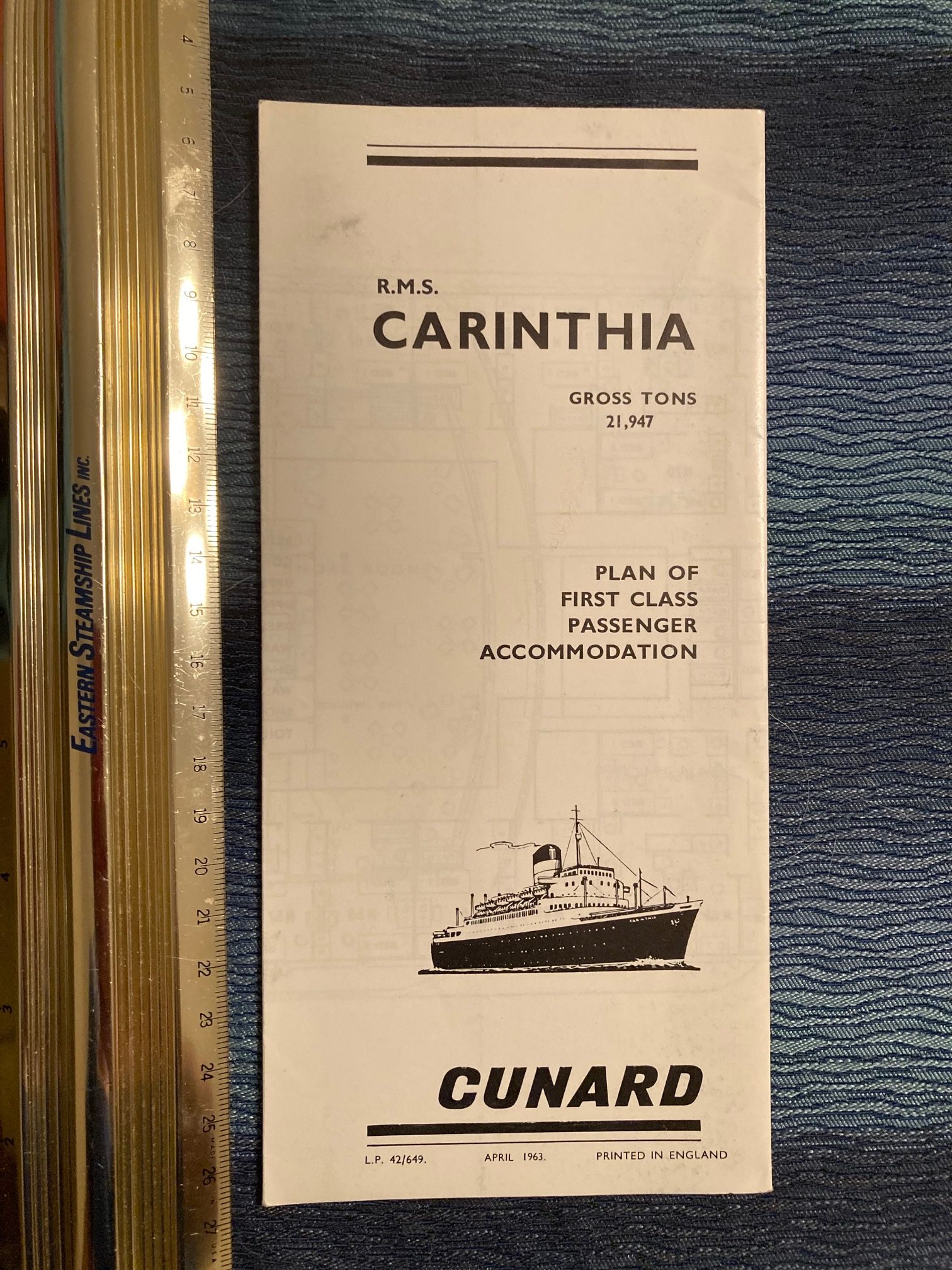 Great glossy Deck Plan for the first class areas on the Carinthia. One of the Canadian quartet .. she also did not endure a name change like the first 2 members of the quartet did when there started their almost fulltime cruising careers. Dated April 63 and Agency stamped in Van Nuys, Ca. 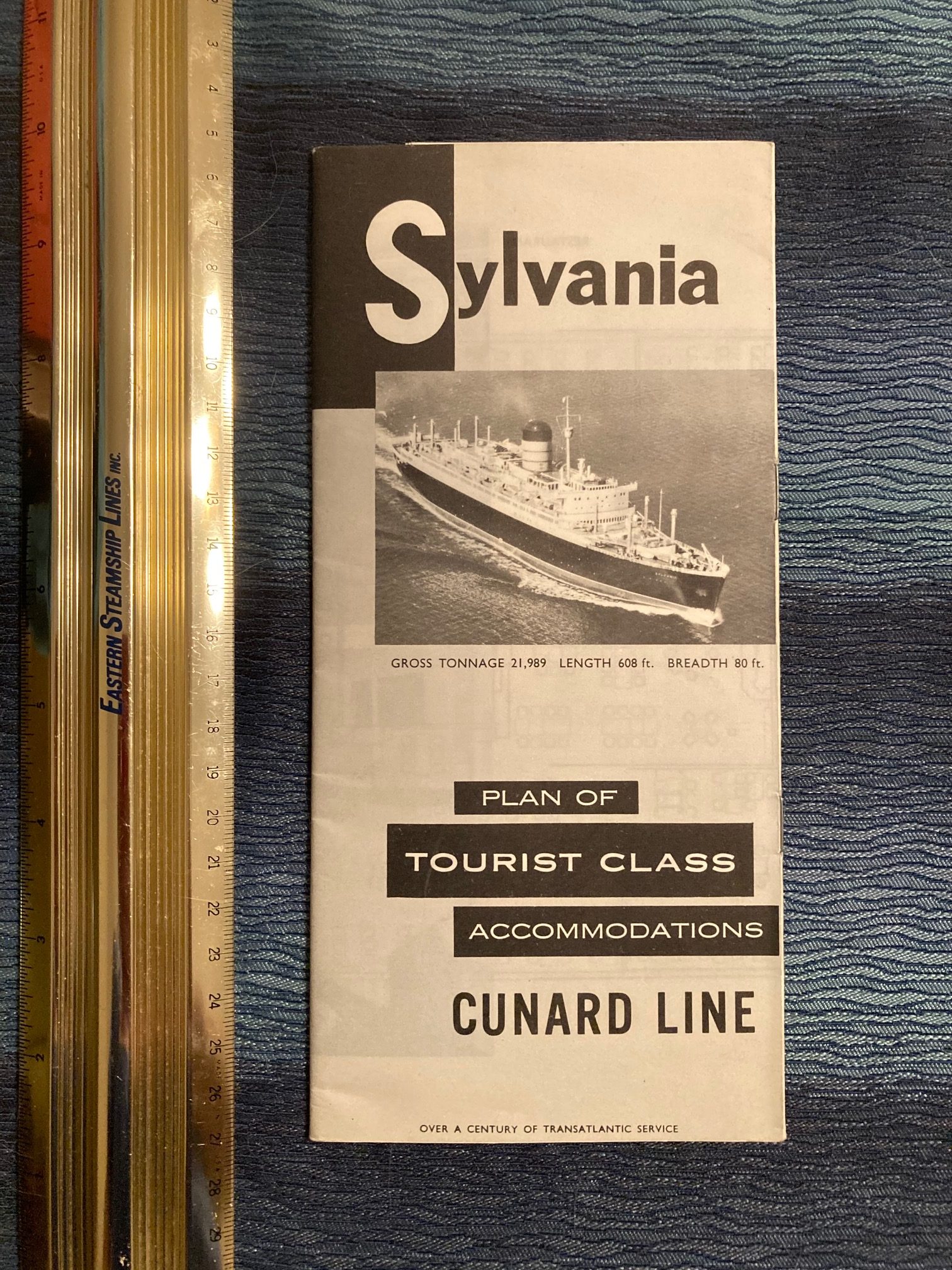 Lovely Plan for the Canadian Sylvania. She was one of the 4 post war sisters  and one of the 2 that did not change names. Excellent condition and dated 7/64. 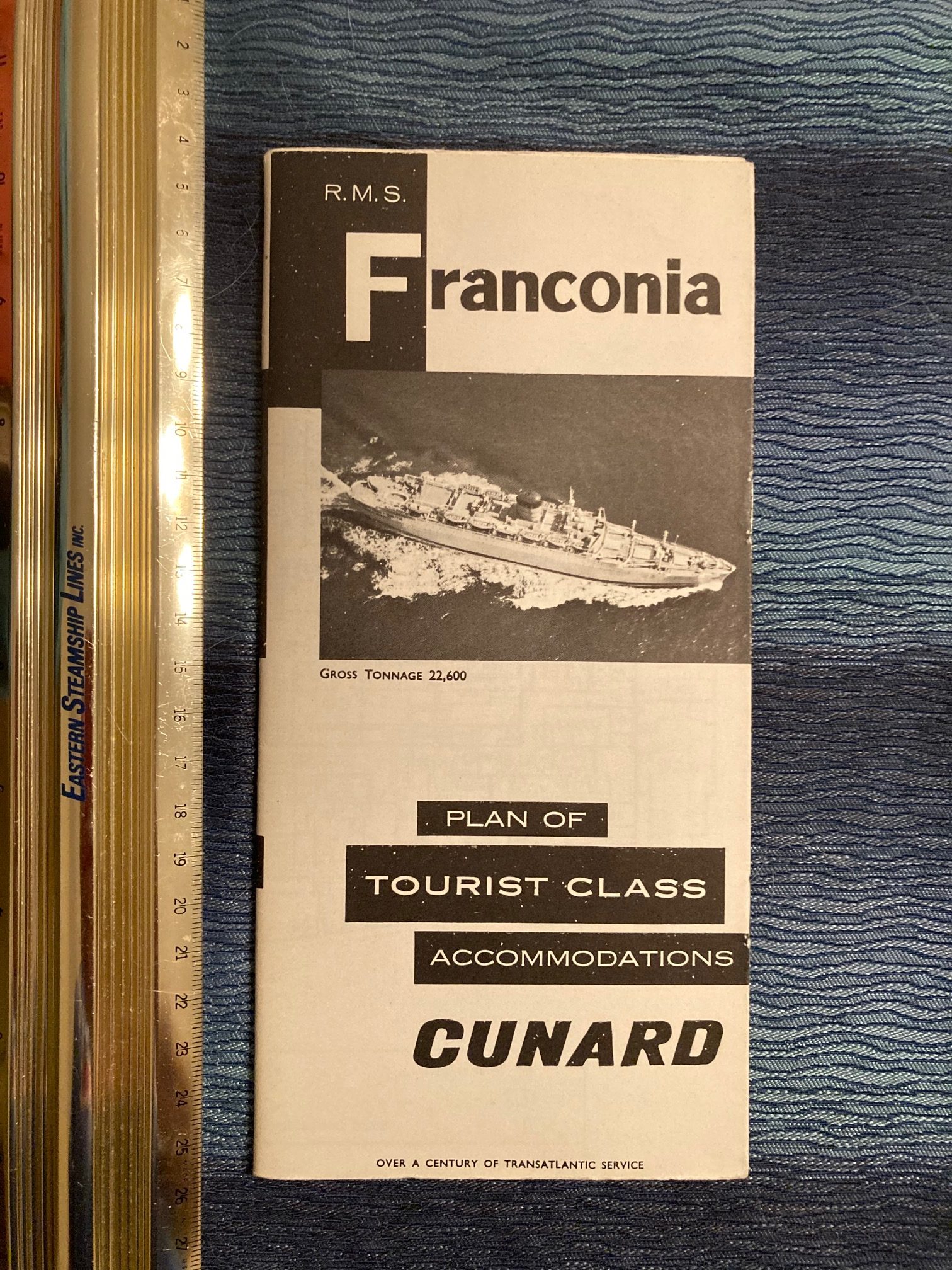 The Franconia did mostly Cruising in the 60’s … but she still did crossings as well. the ex-Ivernia she was given the name Franconia to harken the success of the Prewar beloved Franconia and the memory of her cruising record. 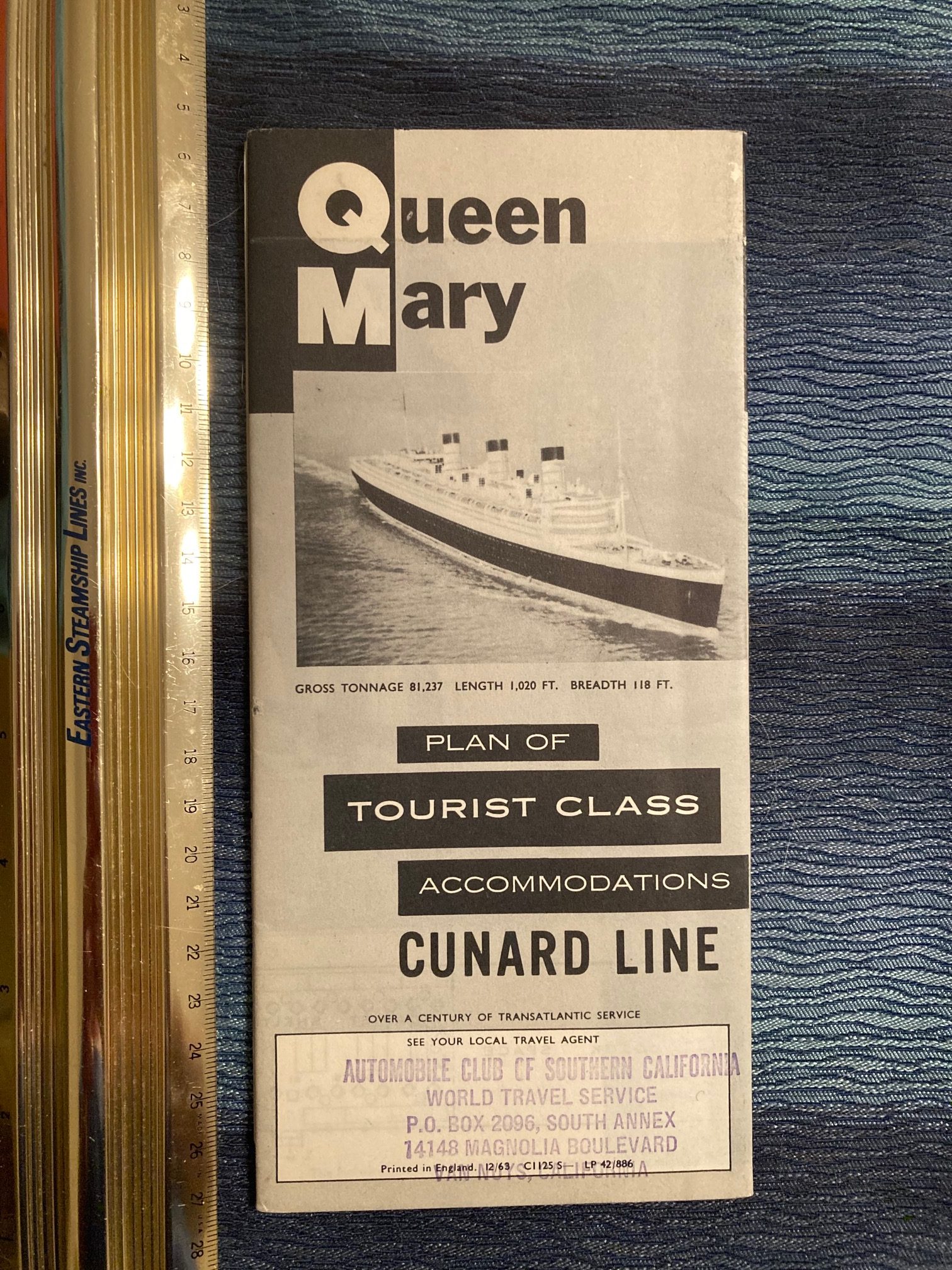 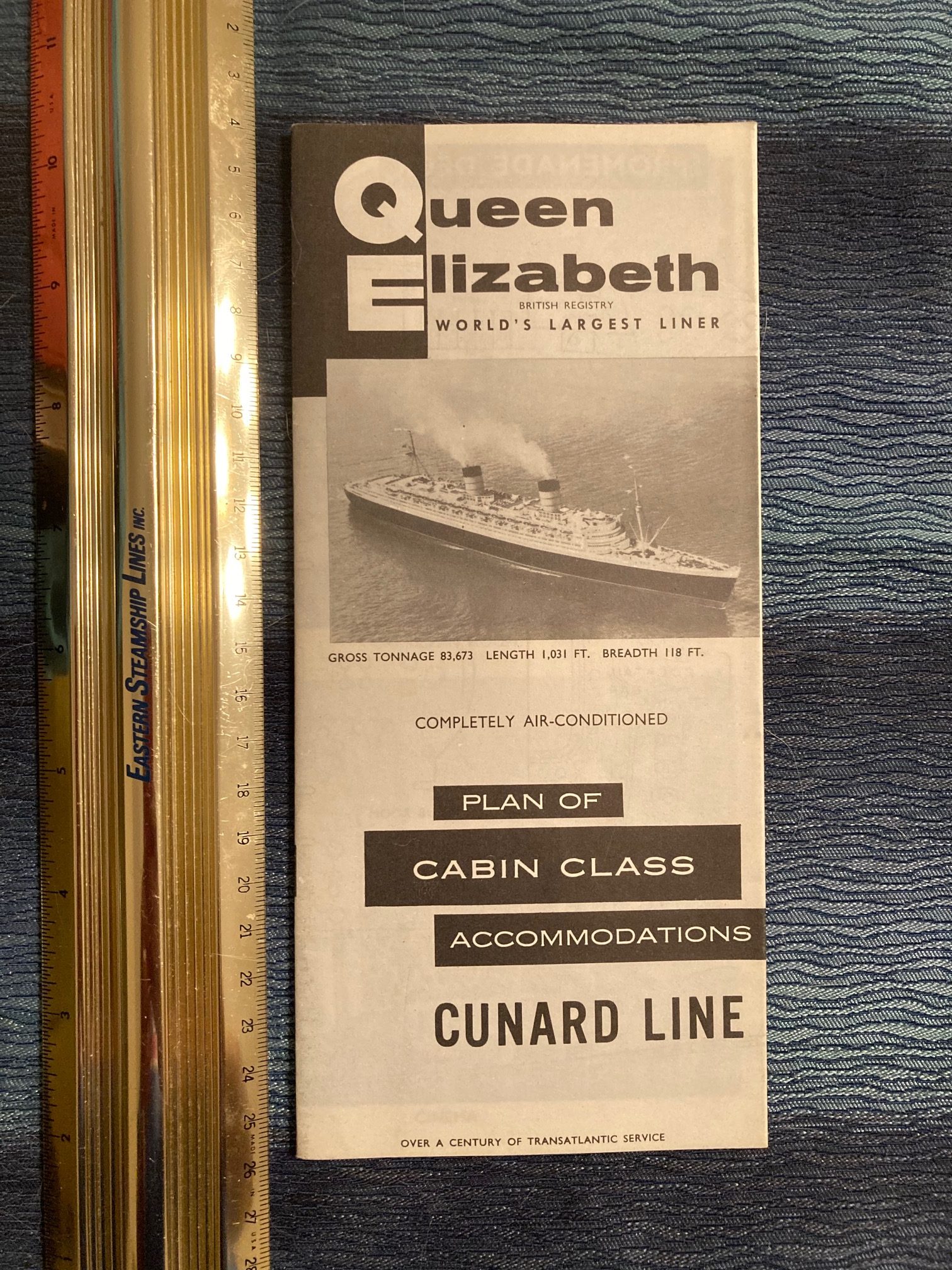 Excellent QE CC deck plan … not as expensive as first class .. but certainly more luxury than Tourist Class.  A lovely way to travel on the magnificent Flagship. Dated 1/66 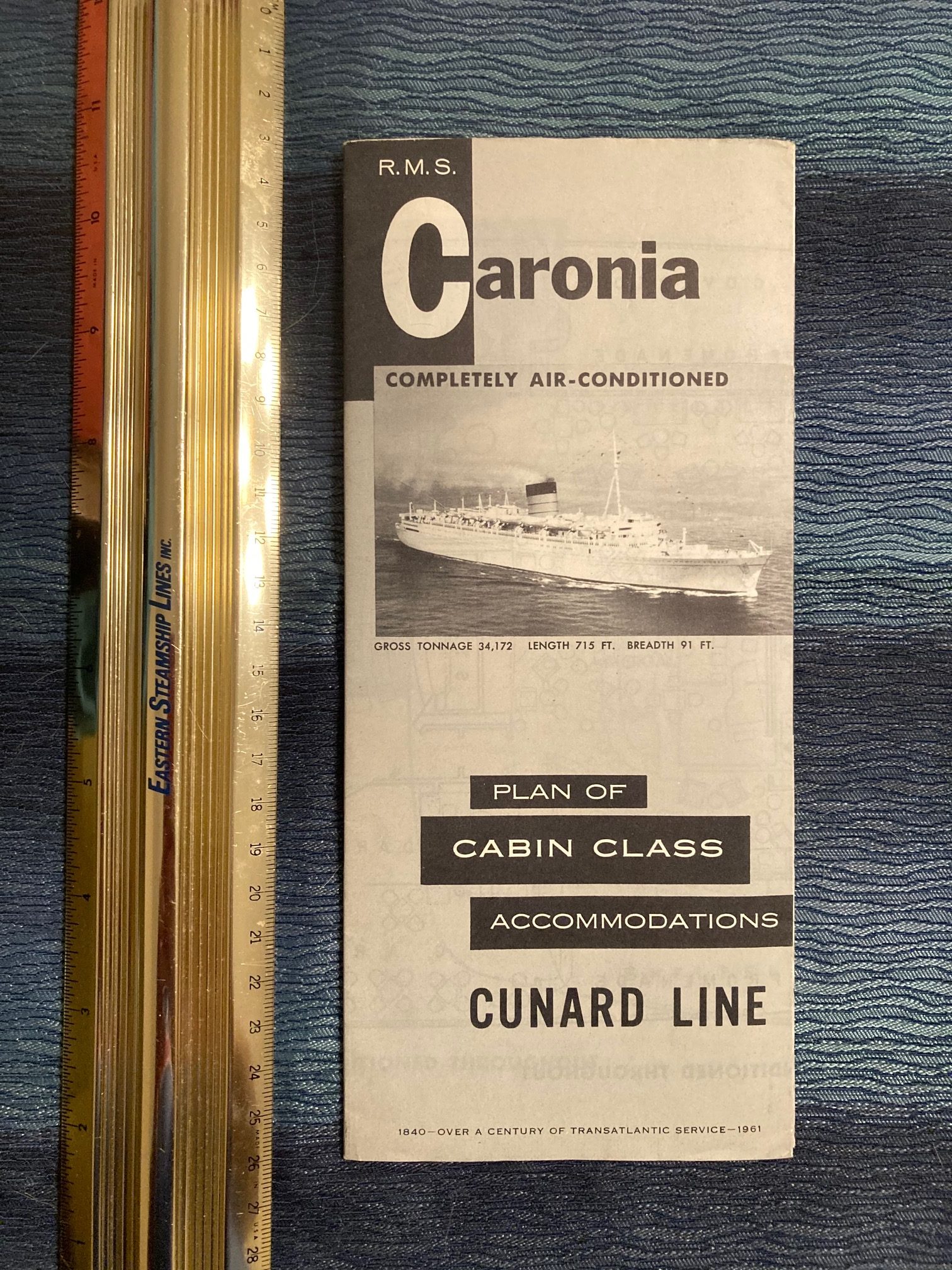 Lovely Plan for the Caronia’s cabin class …. really was interchangeable with her most of her First Class accommodations . CC was for the  more economical cruise traveler … and also needed for the High season of transatlantic. great condition with some BW photos. dated 3/61

Dated April 1967 this photo touts the Q4 s the world’s most powerful twin screw liner. This isn’t the ship herself … but a very nicely done model.

Nice publicity photo for the sister cruise ships. The spent most of their lives int eh warm climates of the Caribbean.

Nice Keystone photo of the “go anywhere” Q4 … which would later become the QE2, being built at the famous John Brown Yards at Clydebank Scotland.

Cunard: Q4 gets her rudder fitted.

Nice Keystone photo of the Q4 … which would later become the QE2, getting her rudder fitted.

Nice FC folio and portrait menu dated 7/30/1960. This ultimate souvenir with lovely  color photos of the ships interiors was given to a child onboard whose name in inscribed in a few places. The covers do show some wear and discoloration which is typical of these items, priced accordingly.