Nice portrait Souvenir Abstract of the ships log for her Med Cruise from 8/10-8/24 1963. Good condition with some minor age wear. Captain Dunkley was in command.

Nice portrait Souvenir Abstract of the ships log for her Cruise Ten 7/25 – 8/7 1965. Good condition with some minor age wear. Commodore James Dunkley was in command .

Nice portrait Souvenir Abstract of the ships log for her Grecian cruise form 7/24-8/7 1964. Good condition with some minor age wear.

Nice interiors fold out for the Orsova … dated March 1964 with and agency stamp on the back cover. Nice B&W accommodation photos

Nice interiors fold out for the Orcades … dated March 1964 with and agency stamp on the back cover. Nice B&W accommodation photos

Excellent like new set of tourist class plans for the SS Chusan. Includes some interior photos, super detailed plans in this March 1964.

Graphically cool entertainment venue program. This lists all the different activities that will take place on the late April cruise  .. year unknown… but early to Mid 60’s. Nice condition!

Graphically cool Entertainment program for the Oriana .. covering a Christmas and NY cruise starting 12/20/64 and running through 1/12/65. Some fold lines from age .. but just screams w/ 60’s graphics and cover art.

4 menus for the Oriana dated in April of 1973. 2 for Luncheon and One for Breakfast.Typical wear and tear with some minor “wine” staining

Excellent magazine covering the May 85-April 86 cruises and voyages  for Oriana.It’s hard to believe this was printed while I was still in High School … it is in Pristine condition. Covers a bunch of cruises ad includes colorful deck plans in a 2 page spread.

Nice brochure with deck plans for the Oriana’s adventure voyages in 1979. Great  color photos and plans .. this does have an odd fold like along the spine

Interesting Announcement for the 2 new ships entering service : Canberra and Oriana. There is a cutaway for both ships and lots of info about both liners. In good shape .. though it was folded oddly in the past.

Nice onboard cruise packet that contains onboard info and a deck plan. These probably would have been part of a packet  that awaited you in your cabin upon arrival. The deck plans ands fully colored. Excellent condition

Very nice Tourist Class deck plans for the lovely Oriana. A shame she was sent to the scrappers.  A very unique ship. 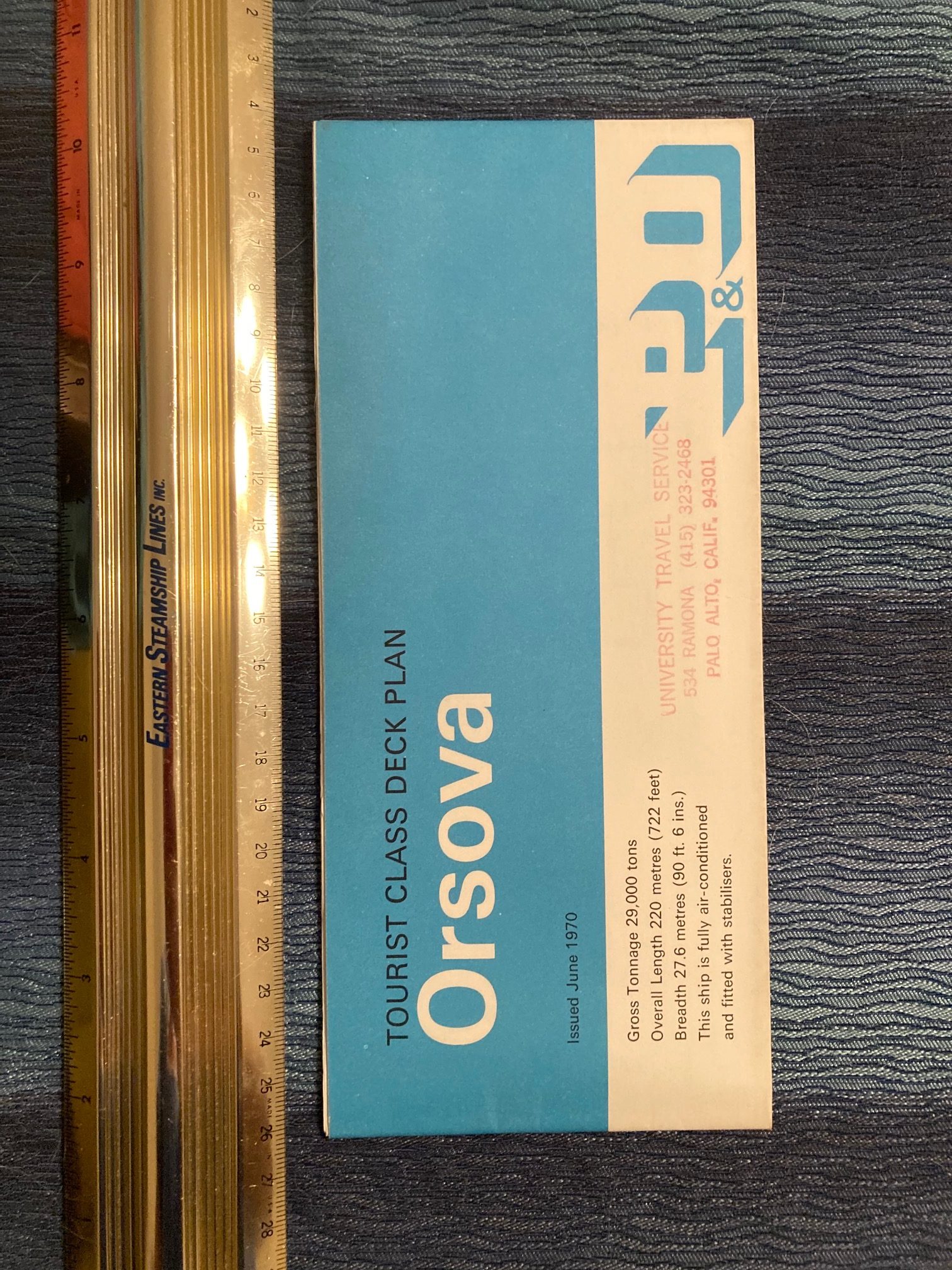 Issued in June 1970, this is a lovely set of plans for P&O’s Orsova. Great condition and almost like new … there are some interior photos included on the plans. University Travel Service agency stamp, Palo Alto, Ca

Great “blue” set of TC plans for the lovely Oronsay. These include some interior photos as well. Almost like new condition with a Palo Alto Agency stamp. Dated January 1971.

P&O: Canberra wake of a Legend by Phillp Dawson

Excellent copy of this book … telling the story of the beautiful Canberra. This is full of great photos and certainly packed with info about the ship and her life within P&O. Lovely ship cutaway of the Canberra and her running mate Oriana on pages 76 and 77. Great lightly used copy.

Great brochure for the 1982 cruise schedules of the Sea Princess (the former SAL Kungsholm). There is an outstanding 3d cut away of the ship and many photos of onboard rooms and activities. Like new condition

Nice large fold out for the 1979 cruise/voyages of the Oriana and Canberra. Large booking form is part of the foldout.